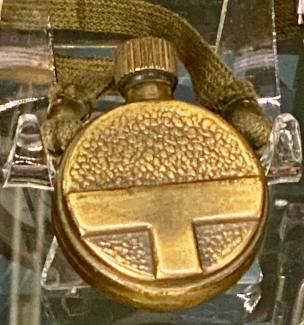 Trench Art is a term used to describe objects made from the debris and by-products of modern warfare. It is most often associated with World War I, although similar items have been produced in other conflicts as well. Most Trench Art was made by servicemen to pass the time when not on the front line. While much of it was simple and amateurish, the production of some examples required metalworking skills or workshop facilities. Prisoners of war, faced with a constant battle against boredom, produced similar items.

The above scent bottle was purchased in Warwickshire, UK.  It measures 2 ½” tall by 1” wide.  This is very rare because most items were smoking related, lighters, ashtrays.

In this case, imagine a soldier thinking of his wife or girlfriend or sweetheart.  Not sure if he will make it through the war or even the next few hours of battle.  Here, he makes a scent bottle of a shell casing and two half-pennys to send home to a loved one.

There is much evidence to prove that some Trench Art was actually made in the trenches by soldiers during war. The items created offer an insight to not only a soldier's feelings and emotions about the war, but also their surroundings and the materials they had available to them.

In Jane A. Kimbal’s book, “Trench Art: An Illustrated History,” she described Trench Art “ as cruel destroyers of human and landscapes transformed into objects of beauty, providing a remembrance of comrades lost and souvenirs for those who lived to tell their tales.”

Kimbal states that while soldiers throughout history have created war souvenirs, the term Trench Art originated in France during the early years of World War I.  Largely neglected beyond a circle of devoted collectors until recently, interest in Trench Art is experiencing a revival by museums and collectors.

Most pieces are not signed, often because this was not felt to be important at the time, since they were made by individual soldiers for their loved ones at home. Also, shell casings pilfered from “government owned property” for decoration and sale by civilians or soldiers to others, would have resulted in severe repercussions to the artist if a shell casing were traced back to them.  The makers of this folk art are then mostly anonymous.

Shell casings were decorated by a variety of metalworking techniques, of which embossing or hammering, engraving and zig-zag or “wiggle-work” were the most common. Applying regimental or city crests or other items to the surface of a shell casing, called appliqué work, was another popular form of decoration.

Although thousands of Trench Art souvenirs were brought home by soldiers and by tourists visiting the battlefields after the war, many pieces eventually drifted up to attics or down to basements as memories of the war faded. Old soldiers sometimes wished to erase painful experiences by putting away their souvenirs, or its meaning was lost after the death of the person who had brought it home. An enormous number of pieces were destroyed in the scrap metal drives of World War II when basements, attics and garages were scoured for scrap brass for the war effort.

Ashtrays, matchbox holders, letter knives, model tanks and planes were typically made and survived. They are often re-purposed lead bullets, brass recovered from spent charge cases, and copper from shell driving bands, although carved wooden and bone pieces, and embroideries are also seen. 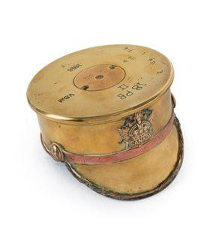 This trench art cap made from a 1916 4-inch shell, with a Canadian pith-helmet cap badge from the Boer war, with a general service button to each side of the peak. Created by Walter Hawkins Dagley (1891 - 1965).

The Canadian War Museum at https://www.warmuseum.ca/ also has over 100 examples of Trench Art from WWI, WW2 and recent military operations.

Some Trench Art was also made by soldiers awaiting a call-up; as well as by wounded and convalescing men for whom handicrafts involved wood, metal and embroidery as part of their rehabilitation.

It is tempting to think that an ancestor made all pieces of Trench Art held by a family, but that may not be the case – there was a large manufacturing trade during and after the war. So pieces sent or brought home from war by the soldier or relative could have been purchased at a subsequent battlefield visit.

Trench Art of the Great War And Related Souvenirs by Jane A. Kimbal