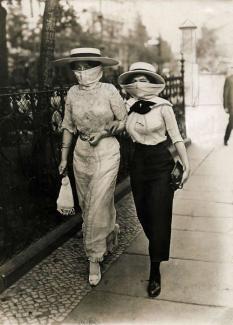 Some research indicates the flu might have started in the US around 1916 and that soldiers brought it to Europe as they began fighting in WWI. Wherever it started, it spread like wildfire as conditions in the confined trenches and training camps were not hygienic. Spain was one of the first European countries to report the fast spreading of the flu, and perhaps that's how the moniker "Spanish flu" came about. The Spanish flu of 1918 was one of the worst pandemics in history, eventually killing 50 million people worldwide.

The European 17th century plague had physicians wearing ominous masks, leather gloves, and long coats in an attempt to fend off the disease. The sinister looking head-to-toe cloak and masks with a long bird-like beak had a costume appearance to it. This look is usually credited to Dr. Charles de Lorme who treated both the wealthy and poor populations.

The mask with beaked nose was about six inches long with two holes, one on each side near the nostrils. It was filled with fragrances. De Lorme thought the beak shape of the mask gave air enough time to be permeated by the various aromas before it hit the plague doctor’s lungs.

In the end, the doctors' wardrobe didn't make much of a difference, and while these costumes were very recognizable, they didn't provide any real protection against diseases.

Additional items thought to assist with fumigating plague-stricken areas and offer protection for the doctors were Tussie-mussies (small floral bouquets held inside a brooch), vinaigrettes and pomanders.

Interestingly enough, precautions during both of these epidemics focused on wearing masks, as does a focus of the current Covid pandemic.  The US government tried to enforce mask-wearing during the flu epidemic, but many refused, declaring that such mandates were threats to their civil liberties. An "Anti-Mask League" was even formed in San Francisco to protest the 1918 legislation.

It's now an instance of history repeating itself--fast forward to the Coronavirus pandemic and US lockdown protests, as men and women are often refusing to wear masks, also citing their civil liberties as a reason for defying public health orders.

As many men didn't practice proper hygiene in the early 1900s and also thought that wearing masks was too feminine, public health officials tried to promote personal hygiene as a display of patriotism and duty. Public health advertisements and cartoons during the epidemic usually featured men and boys.  Male soldiers returning home from Europe after the war, spread the disease throughout the US.  During the time period between the WWI and WW2, men and boys were also seen as the "weak links in hygienic discipline."

But what did work during the plague and flu epidemics was enforcing and sustaining social distancing measures. Everyone tried to do their part and took responsibility for their actions. In 1918 health education expanded and personal hygiene products for men became a fast growing industry.  Soaps, talc, cologne and aftershave products had bold scents and marketing these products took a masculine approach in addition to manly-looking packaging.

Over the decades, hygiene has risen to a high priority in our society. We all know that while previous personal hygiene was not so thorough, it does remind us of some remedies used by the men and women during the 17th, 18th and 19th centuries--the vinaigrette and pomander.

Before fragrance soaps and powders, people needed a way to mask the odors of the environment and often, themselves. Designed as a small container, usually in gold or sterling, the vinaigrette held a small cloth that was soaked with sweet aromatic perfumes or oils. When the user felt overwhelmed by unpleasant odors, they took a whiff and were instantly revived! The fragrances provided a relief from odors, but at the time it was thought to protect people from the plague as well as other diseases. Vinaigrettes could also be used to hold a small cloth soaked with vinegar to help from fainting.  Below is an early 1800s vinaigrette designed as a harp.  The containment is in the underneath.

Vinaigrettes were used by both men and women and were hung from chatelaines, long watch chains or bracelets. The wealthy often sported vinaigrettes adorned with gemstones and they could be figural in shape.  Pomanders, from the French "pomme d'ambre" is a ball or perforated container made to hold perfumes or sweet-smelling spices or herbs. It was similar to a vinaigrette as it could be worn or carried and was also used to protect against bad odors.  The word pomander can refer to the fragranced material or to the container that held the scent. Containers were also made from gold or sterling and could be figural in shape, adorned with gemstones. Very small pomanders were attached by a chain to a finger ring and held in the hand.

The lessons from the 1918 epidemic were clear--masks worn correctly and in public added to a complete social distancing program. Schools were closed during the epidemic and public gatherings were prohibited. Newspapers included instructions on "how to make masks that work." 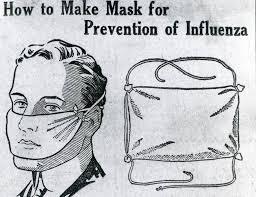 The similarities and controversies between the 1918 Spanish flu and the 2020 virus are eerie. The purpose of wearing a mask in 1918 was often misunderstood. Today, as in 1918, spreading the word that wearing a mask is not necessarily to prevent a healthy person from getting sick, but it prevents people who are already infected from spreading the virus through contact. Advocates for masks in 2020 can use this historical lesson to argue that masks must be worn properly, or they will not achieve their objectives.

The arrests for defying mask laws in 1918 confirmed that people did not want to change their behavior just because they were ordered to do so by the government. There were fines against coughing, sneezing, spitting and neighbors talking to each other outside. Special flu police were often employed to round up children playing on the streets and sometimes even in their own backyards. In San Francisco, a law was passed that anyone who was seen not wearing a face covering was subject to a fine that ranged from $5 to $100 and the possibility of 10 days in jail.

In the 1920-1940s compacts, powders and perfumes could be found with a "mask" theme. Were these figural themes to remind us of early items that protected us from disease? Or did manufacturers produce these figural items as a whimsical way to attract buyers? They are certainly collectible and a source of amusement today!

Below are three examples of these mask reminders.  Whether it is the continued use of the Plague Doctor's Venetian Mask, the masks used in brands such as Colgate and Co. Powder Box or the Tragic and Comedy masks used in the L.T. Piver Powder Box in the 1920s, masks have been around for centuries and will continue.

Hopefully in 2020 we continue to learn from the successes and failures of handling the flu epidemic of 1918 as no disease in history has led to such intrusive restrictions all over the world.